First Devlog: Working on The Colors of Love 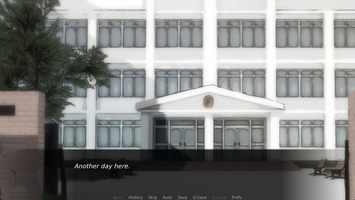 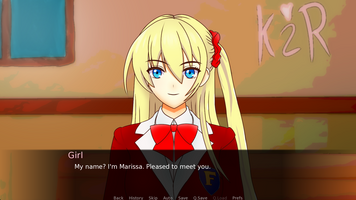 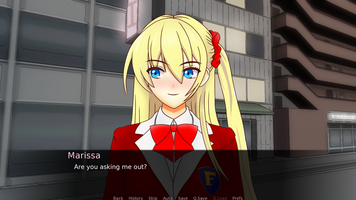 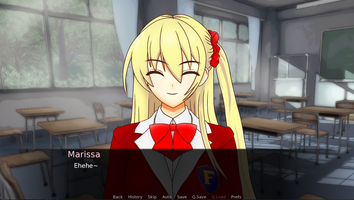 In this, my first post here on itch.io, I’m going to talk about the creation process behind The colors of love.

Back in January I had an itch(no pun intended) about joining a game jam, so I searched through the available jams and then I found out about the Valentine’s VN Jam 2021. I’m a fan of romantic stories so I decided to give it a try.

Then after the game jam began I started to think what sort of romantic story I could make that would be viable to make in just a month, mostly because I could only work on it on my spare time.

Then I finally had an idea that I thought that could be interesting and decided to go with that. I won’t say much about the story here because, well, spoiling a VN’s story is spoiling half of the fun.

After I had my idea it was time to start working on it. First I needed to decide on which engine I’d use for it. My choice was RenPy.

RenPy is a very solid engine, it has been used in countless of visual novels and it’s very simple to use. It wasn’t my first time working with it, I’ve worked with RenPy before when I contributed to the Monika After Story mod for DDLC so I was very familiar with RenPy’s capabilities and it was the best tool for this job.

Then while I was downloading the latest version of RenPy I noticed they added support for Live2D and thought that this would be a great opportunity to check it out as I’m familiar with Live2D and like working with it.

The other tools I used for the developing the game were:

It was an intense month. One of the first things I tried was making a simple test with RenPy’s Live2D, for that I used the model of CRB-5, who’s Crimson R Game’s mascot resident AI and I was glad to see that she was working fine however there was some issues with the animations. Supposedly, there is a way to define some motions that can work simultaneously, however I wasn’t able to figure out quickly how to make those or where to put that “flag” or whatever it was required to define that.

Also Renpy’s Live2D API didn’t give me direct access to modify the model’s parameters on the fly so I couldn’t animate the model through code, I had to define motions and then play those as if I were just changing a sprite normally, which was actually cool and saved me some time once I got used to the workflow.

After my little experiments with it, it was time to actually start making the assets for the VN. I spent quite a good chunk of time on them, even if they all look rather simple it took me a lot of time to make them as my forte is programming(I’m giving my best to try and get better at drawing and designing.). Clip Studio Paint and the Live2D editor were the MVTs here, if those weren’t so easy to use I wouldn’t have been able to finish on time( And I literally was only able to submit the game an hour before the deadline).

Once the assets were finished I started to add them to the VN, I have to say that I did a write some code and started adding the VN’s script while I was working on the art assets. The way I was working was like code some stuff as I got inspiration and then once I had finished writing/coding the idea then go back to drawing. That process is helpful for me as it makes it less mind tiring to me.

While I was adding the assets I noticed that some animations weren’t blending the way I wanted and that I also didn’t like that the Live2D character(Whose name I hadn’t mentioned until now) Marissa was still making her “talk” animation even after the text had appeared for the player, so, due to the time constraints and that I knew I had a lot of work to do I ended up making some ugly hacks abusing the “extends” and “{nw}” tag of renpy to change the animation playing after the dialogue was over.

As I was adding more and more elements to the game it was taking shape and form, however, it was very very silent. I was hoping to have enough time to make up some simple soundtracks to got with it but, as you guessed, time wasn’t on my side so I thought of adding sound effects first and then see how it the game felt with them. I went and found some CC0 audio assets on freesound.org. I saved the urls to the assets and will post them as extra credits on the official page for the game, in case you guys want to use those yourselves. After adding the sounds I thought those were a bit helpful and would somehow make up for the lack of music.

After all that, it was just a matter of keep working on things, add them to the game and test. Sadly, my time was almost over by the time I got to that point, so I kept focusing on completing the story and to add the finishing touches to the game.

If my bad English so far didn’t make you notice, English isn’t my first language so I had some trouble with grammar and spelling, fortunately two of my online friends were able to test an early alpha build and helped me catch some mistakes on the first 2 chapters of the story. I thank them again for that.

When I was finally done with the full script of the story it was time to start giving the game it’s own identity and soul. Don’t get me wrong, RenPy’s default UI looks nice and minimalistic and more importantly, is easy to use(I’ve seen many projects sacrifice usability for looks and regret it later after the user complains.), however I wanted my game to feel a bit more complete so changing the UI a bit was a necessity for me. Thankfully, RenPy’s default UI is easy to customize and I already had some experience with it and while I didn’t do any fancy stuff this time I was still able to modify it to my liking on time and to add a somewhat nice credits sequence(Sadly the song that I was working on for the credits wasn’t ready on time).

Once I decided that the game included everything I wanted and could add for the deadline, I went and created the game’s page on itch.io. The process was simple and the site guided me well. However, as it was my first time using the butler tool I had to take some time to install it and get familiar with it. I thought at first that RenPy included it as it has an “upload to itch.io” option but I think either it was because of the OS restricting the executables(All the development was made on macOS Big Sur) or those weren’t included with RenPy. However, once I got it right the process was fairly simple and I’m happy with it.

One thing I need to work on though, is customizing both the game’s page and my own profile’s page to make it more appealing, so expect some changes in those, hehe.

This was a very satisfying experience. It has been a long time since I had done a game in just one month. I love the feel of excitement of making something new and working with new stuff(the live2d support RenPy has). I know that I kept mentioning the deadline as a bad thing but I like working that way as I like working against time, it’s like a race against one self, if one’s going to be able to make it or not, it’s a very thrilling feeling. It motivates me and makes me work harder. It’s also a very good practice because in this industry we need to release game’s on release dates while meeting our player’s expectations. While industry and technology may have evolved now to allow us to push day 1 patches and other things I like how things were back in the old days. One release and that had to be the real deal. And while I do agree that it’s better to move the release date if it can’t be met, for this one I wanted to have this “release date can’t be moved” feeling, so yeah that’s how it went.

Also I know that one of the purposes of game jams is to work with others and stuff but this time I was also practicing my writing, drawing and designing skills so I went into it solo, but I’d be happy to work with other people on future games or jams when the opportunity comes.

Thank you for taking the time to read about this little experience and the development process. If you haven’t played the game I hope you decide to give it a try and if you have played it please feel free to leave me feedback in the comments. While I may not answer quickly or answer at all, I usually read all the comments and take people’s feedback into account for my work.

Get The Colors of Love

The Colors of Love

Experience the story of a teenager as he finds the love of his life.